Tyler born on a day with 96 numerology
Rick Tyler born 10/10/1957=20,77,96,24..283rd day 82.this news comes 14 weeks 4 days /144, 102 days, 3 months 1 week 3 days/313/65th prime,and 3 months 10 days/31  before his 61st b-day.
POLK COUNTY, Tenn. (WTVC) - The billboard of a Tennessee restaurant owner running for Congress reading "Make America White Again" has drawn criticism from Polk County residents.
Rick Tyler told WTVC he owns Whitewater Grill in Ocoee, but in the coming months will transition to campaigning to represent Tennessee's 3rd District in the U.S. House of Representatives.
Whitewater Grill=82..corresponds with his birth numerology also the reflection of 28
Rick Tyler For Congress =280/28,107/28th prime on a day with 28 numerology
Tyler says his "Make America White Again" sign, which plays off of presumptive Republican presidential nominee Donald Trump's "Make America Great Again" slogan, was taken down on Tuesday evening.
Tyler spelled out his billboard strategy on his congressional campaign website. In a page titled "The Billboard Strategy=317/66th prime(on a day with 66 numerology)," he explains the reasons he wanted the billboard up:

"With its towering and massive stature, the billboard sign is difficult to ignore and its message comes across as authoritative and influential."

The page goes on to explicitly cite Trump as an inspiration for the sign:

"For these reasons we are confident that a widespread and creative billboard advertising game plan could go a long way toward making the Rick Tyler For Congress candidacy both viable and a force to be reckoned with. Clearly we are in uncharted waters, in that there has never been a candidacy like this in modern political history. Of great significance, as well, is the reality of the Trump phenomenon and the manner in which he has loosened up the overall spectrum of political discourse."

hunger strike=70,65...immigration=128,65  Ethel Kennedy=128,65 (with k except)
Ethel Kennedy, the 90-year-old widow of Bobby Kennedy, says that she will join a hunger strike in protest of President Donald Trump’s contentious immigration policies that have separated thousands of children from their parents at the US border.
Ms Kennedy, who is a human rights advocate, said that she will join the “Break Bread Not Families” hunger strike, alongside several other prominent individuals.
The strike has been organised by several activists groups, including the Robert F Kennedy Human Rights nonprofit.
Posted by The Lion's Den at 11:47 AM No comments:

born with 131 numerology...10/13..13/10..131..born with 112 numerology..progressive star=103,211/47th prime..Democrat=47..victory=112..earthquake=107/28th prime..she's 28 yrs old
It is fitting that the earthquake victory of Alexandria Ocasio-Cortez over one of the most powerful Democrats in the country came sandwiched between two catastrophic US supreme court decisions. The court, shifting rightward with Donald Trump’s Neil Gorsuch, defended a travel ban on people from Muslim-majority nations and chose to devastate labor unions with its decision on Wednesday.
Many voters, particularly young people, understand the time for incrementalism and moderation is long over, and ended for good when a race-baiter who empowers white supremacists and oligarchs stormed into the White House.
It ended with the kids in cages, the attacks on immigrants and all people of color.
Ocasio-Cortez, a 28-year-old former Bernie Sanders organizer, crushed Joe Crowley, the number four-ranked Democrat in the House, on Tuesday night. Crowley was widely viewed as a possible successor to Nancy Pelosi, the House minority leader.

After learning about separated migrant families at the U.S.-Mexico border, one 6-year-old boy from Atlanta wanted his family to help. His suggestion? Setting up a lemonade stand for a fundraiser -- which quickly raised more than $13,000.
His mother, Shannon Cofrin Gaggero, originally set a goal of raising $1,000, according to the Atlanta Journal-Constitution, and the family spent a week preparing for the physical stand outside their home. Gaggero also set up a "virtual" shop -- a fundraiser on Facebook for friends and family who couldn't visit in person.
Posted by The Lion's Den at 10:35 AM No comments:

Cleveland to pick up Kendrick Perkins' option for 2018-19

Cleveland to pick up Kendrick Perkins' option for 2018-19

Kendrick La'Dale Perkins is an American professional basketball player for the Cleveland Cavaliers of the National Basketball Association. He has previously played for the Boston Celtics, Oklahoma City Thunder and New Orleans Pelicans. Wikipedia

CLEVELAND -- Kendrick Perkins, who was signed on the final day of the regular season but did not play a single minute in the 2018 postseason, will have his contract option for 2018-19 picked up by the Cavaliers, multiple league sources told ESPN.

As much as the Cavs appreciate Perkins as a locker room presence, the decision is simply a salary-cap ploy in order to try to aggregate the 33-year-old center's $2.5 million salary along with an existing contract in order to pursue a trade around the league.
Team sources told ESPN that the Cavs "continue to explore all options to improve" heading into LeBron James' decision about his future with the franchise.
Posted by The Lion's Den at 10:00 AM No comments: 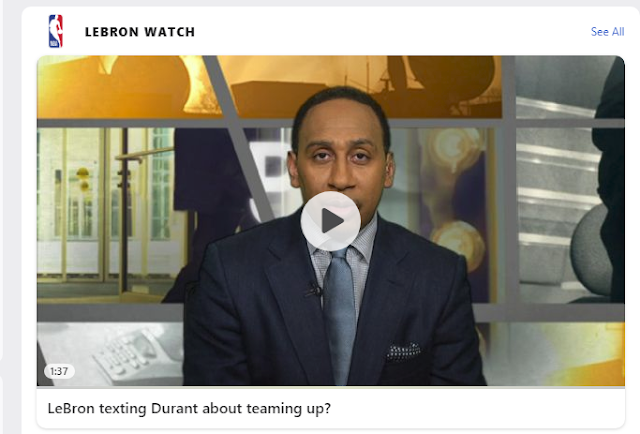 Becky Hammon moves up, gets promoted by San Antonio Spurs

Becky Hammon moves up, gets promoted by San Antonio Spurs

assistant coach=71(matching  day numerology),91 (matching her birth numerology)
Becky Hammon is moving up San Antonio's coaching ladder.
The Spurs announced Wednesday that they have promoted Hammon and that she will fill the spot vacated by James Borrego on the team's roster of assistant coaches.
Posted by The Lion's Den at 7:12 PM No comments:

WASHINGTON — Justice Anthony M. Kennedy announced on Wednesday that he will retire this summer, setting in motion a furious fight over the future of the Supreme Court and giving President Trump the chance to cement a conservative judicial philosophy on the American legal system for generations.
A critical swing vote on the sharply polarized court for nearly three decades, Justice Kennedy, 81, embraced liberal views of gay rights, abortion and the death penalty even as he helped conservatives trim voting rights, block gun control measures and unleash campaign spending by corporations.
His replacement by a conservative justice — something Mr. Trump has vowed to insist upon — is certain to reshape the country’s legal landscape and could imperil a variety of landmark Supreme Court precedents on social issues, like abortion, where Justice Kennedy frequently sided with his liberal colleagues.
Posted by The Lion's Den at 5:30 PM No comments:

69 ..like her birth numerology and todays numerology..Pelosi=32,40, 86,76 Waters=32,40,86,76..unacceptable=40,68(reflection of 86)..Pelosi=31 on a day with 31 numerology..anti-trump rhetoric=105/15,,Nancy D'Alessandro=150/15
As reports surfaced that Rep. Maxine Waters=88 (like Nancy's birth numerology& Trump=88), D-Calif.,(California=88) called on Trump resisters to harass=66  Trump administration officials over the weekend, Nancy Pelosi wagged her finger.=137/33rd prime The House Minority Leader subtly reprimanded one of her own, adding to a growing bipartisan dogpile of criticism amidst a larger debate on the role of civility in the Trump era.
“In the crucial months ahead, we must strive to make America beautiful again,=1005/15” Pelosi, D-Calif., wrote on Twitter on Monday morning. “Trump’s daily lack of civility has provoked responses that are predictable but unacceptable. As we go forward, we must conduct elections in a way that achieves unity from sea to shining sea.”
Posted by The Lion's Den at 5:37 PM No comments:

rookie of the year

Philadelphia 76ers guard Ben Simmons has been named the Rookie of the Year.
Simmons beat out Donovan Mitchell of the Utah Jazz and Jayson Tatum of the Boston Celtics for the honor, which was revealed at the NBA Awards show.
Simmons was drafted ahead of the 2016-17 season, but because he missed all of that season due to injury he is considered a rookie this year.
That has been a point of contention with Mitchell, who was drafted ahead of the 2017-18 season.
Posted by The Lion's Den at 7:01 PM No comments:

EuroLeague guard Brad Wanamaker is finalizing a deal to join the Boston Celtics next season, league sources told ESPN.
Wanamaker, 28, is committed to joining a Celtics backcourt that heads into the summer unsure about the future of guard Marcus Smart, who will be a restricted free agent.
Wanamaker completed a strong season in the EuroLeague, where he reached the final four with Turkish power Fenerbache. He was voted second-team all-EuroLeague this season.
Wanamaker had discussed NBA deals with several teams over the past two years. Wanamaker was an undrafted four-year player out of the University of Pittsburgh in 2011. He has played for seven European teams since leaving college. He is a Philadelphia native.
Wanamaker played part of a season in the NBA D-League, winning a title with the Austin Toros in 2012.
Wanamaker has drawn a good deal of NBA and elite European team interest in the past two years.
Posted by The Lion's Den at 5:34 PM No comments:

Some poets come to their art in youth, but few as early as Donald Hall. He made up his mind to be a poet when he was 14, began to write poems several hours a day, and never wavered from his calling in a long, prolific life. Upon being appointed poet laureate of the United States in 2006, Mr. Hall explained simply his view of the value of poetry: “It is beautiful,” he said, adding that “there is no other purpose than the beauty of it. And that is reason enough to be.”
Mr. Hall died Saturday night. His death was announced by Wendy Strothman, Mr. Hall’s literary executor. He was 89 and had lived much of his life at the old farm called Eagle Pond, his family’s ancestral homestead, in Wilmot, N.H.
Posted by The Lion's Den at 4:41 PM No comments:

DONALD TRUMP THREW STARBURST CANDIES AT ANGELA MERKEL, SAID 'DON'T SAY I NEVER GIVE YOU ANYTHING'

During his controversial meeting with leaders of the G-7 less than two weeks ago, President Donald Trump allegedly threw two pieces of Starburst candies on the table in front of German Chancellor Angela Merkel, saying “Here, Angela. Don’t say I never give you anything.”
The exchange, described on CBS News by Eurasia Group President Ian Bremmer, sheds further light on the tense atmosphere depicted in the now famous photograph of the meeting, in which Trump appears with his arms crossed and a defiant scowl across his face.
The annual G-7 meeting—which brings together the leaders or representatives of the United States, Canada, Britain, France, Germany, Italy and Japan—was held in Canada from June 8-9. Trump had decided to arrive late and leave early, and he ultimately refused to sign the joint communiqué that the G-7 leaders sign each year. Merkel had called Trump’s decision “sobering and a little depressing,”  while French President Emmanuel Macron had also referred to “fits of anger” when describing the meeting. But Bremmer’s account demonstrates an even clearer picture of how terrible Trump’s relationship with Merkel and other U.S. allies is.
“It was at this point, towards the end of the summit, that Chancellor Merkel of Germany and Prime Minister Trudeau of Canada got together with some of the allies and really wanted to press Trump directly to sign the communiqué, that talked about the commitment to a rules-based international order. Trump was sitting there with his arms crossed, clearly not liking the fact that they were ganging up on him. He eventually agreed and said OK he’ll sign it. And at that point, he stood up, put his hand in his pocket, his suit jacket pocket, and he took two Starburst candies out, threw them on the table and said to Merkel, ‘Here, Angela. Don’t say I never give you anything,’” Bremmer described to CBS.
Posted by The Lion's Den at 4:21 PM No comments: