Larry Joe Bird (is an American professional basketball executive, former coach and former player, most recently serving as president of the Indiana Pacers in the National Basketball Association (NBA). Since retiring as a player for the Boston Celtics, he was a mainstay in the Indiana Pacers organization, but stepped down from the position of president following the first-round of the 2017 Eastern Conference playoffs. He has been described as one of the greatest basketball players of all time.

Palestinians hold day of mourning after 773 ‘shot with live ammunition’

Palestinians hold day of mourning after 773 ‘shot with live ammunition’

is a major, biblically derived Jewish holiday. Jews celebrate Passover as a commemoration of their liberation by God from slavery in ancient Egypt and their freedom as a nation under the leadership of Moses. It commemorates the story of the Exodus as described in the Hebrew Bible, especially in the Book of Exodus, in which the Israelites were freed from slavery in Egypt. According to standard biblical chronology, this event would have taken place at about 1300 BCE (AM 2450).[5]
Passover is a spring festival which during the existence of the Temple in Jerusalem was connected to the offering of the "first-fruits of the barley", barley being the first grain to ripen and to be harvested in the Land of Israel.[6]
Passover commences on the 15th of the Hebrew month of Nisan and lasts for either seven days (in Israel and for Reform Jews and other progressive Jews around the world who adhere to the Biblical commandment) or eight days for Orthodox, Hasidic, and most Conservative Jews (in the diaspora).[7][8] In Judaism, a day commences at dusk and lasts until the following dusk, thus the first day of Passover begins after dusk of the 14th of Nisan and ends at dusk of the 15th day of the month of Nisan. The rituals unique to the Passover celebrations commence with the Passover Seder when the 15th of Nisan has begun. In the Northern Hemisphere Passover takes place in spring as the Torah prescribes it: "in the month of [the] spring" (בחדש האביב Exodus 23:15). It is one of the most widely celebrated Jewish holidays.

Gaza hospitals, running low on blood and overstretched by the huge number of wounded, were reeling after one of the enclave’s bloodiest days outside of open war, in which Israeli soldiers shot 773 people with live ammunition, according to the ministry of health.

Fifteen of the wounded died, said the ministry spokesperson Dr Ashraf al-Qidra. “Most of the dead were aged between 17 and 35 years old,” he said. “The injuries were on the upper part of the body.” He added that the remainder of the wounded, some of whom were in a critical condition, had been “shot with live ammunition”.
The violence erupted on Friday after mass demonstrations took place demanding the right of return for Palestinian refugees and their descendants to land in Israel.
Tens of thousands of people, including women and children, had planned to camp several hundred metres from the Israeli frontier, which surrounds the 140-square-mile Gaza strip on two sides, on the first day of a peaceful, six-week protest.
But from the main camps, groups of mostly young men approached the border at several locations and started throwing stones and burning tyres. Soldiers responded by opening fire throughout the day.
More than 1,400 people were wounded, mostly by bullets but also rubber-coated rounds and tear-gas inhalation, the health ministry said. The Guardian was unable to independently verify the ministry’s figures.
Posted by The Lion's Den at 5:35 PM No comments:

targeted attack=89..reported on the 89th day 3/30/2018=33,51,71,17
71 numerology 71/20th prime  He is 20 yrs old
shot=17,19,46,62  Jahrell Lillard,=62 targeted attack=46
Oregon the 33rd state..OR=33 Clackamas=62,19
Jahrell Lillard, the half-brother of Portland Trail Blazers point guard Damian Lillard, is hospitalized in Clackamas County, Oregon after a shooting that police officials called a "targeted attack."
TMZ Sports reported Lillard was wounded after being shot at multiple times by two gunmen in a parking lot Thursday night. Police said he was able to escape into a nearby store for help before collapsing. The suspects fled the scene.
The Clackamas County Sheriff's Office told Fox 12 Oregon that Lillard, 20, is recovering after an overnight surgery. No further information about his condition was released.
Damian Lillard has been away from the Blazers to attend the birth of his child. He confirmed the arrival of his son, Damian Jr., with an Instagram post Thursday:
Posted by The Lion's Den at 5:15 PM No comments:

CNN)Ethan Sonneborn is an eighth grader who loves basketball, fishing and writing.

Eighth grader=74,214  youngest candidate=70
He also wants to be governor of Vermont. Not when he grows up, but now.
And thanks to the fact that there are no state laws that require gubernatorial candidates to be a certain age, Ethan is officially the youngest candidate to run for that office in Vermont history.

Ethan, who lives in Bristol, is campaigning ahead of the state's Democratic primary in August, where he'll face two challengers.
His issue? Stricter gun control, legislation he says his home state needs.
But being 13 poses some unique challenges for a candidate.
One of them, says Vermont Democratic Party Executive Director Conor Casey, is school.
"It's funny, his biggest barrier is complications to being in school while simultaneously running for governor -- not that I'm advocating that he drop out," Casey said.
"Also, not having a driver's license. He's dependent on other people for rides to statewide events he speaks at."
Posted by The Lion's Den at 5:04 PM No comments:

In 1991, covering the East Timor=39 independence movement, Goodman and fellow journalist Allan Nairn reported that they were badly beaten by Indonesian soldiers after witnessing a mass killing of Timorese demonstrators in what became known as the Santa Cruz Massacre.=113/30th prime,58,257/55th prime
In 1998, Goodman and journalist Jeremy Scahill (later a founding editor of The Intercept, along with Glenn Greenwald and Laura Poitras) documented Chevron Corporation's role in a confrontation between the Nigerian Army and villagers who had seized oil rigs and other equipment belonging to oil corporations. Two villagers were shot and killed during the standoff.[15][16] On May 28, 1998, the company provided helicopter transport to the Nigerian Navy and Mobile Police (MOPOL) to their Parabe oil platform, which had been occupied by villagers who accused the company of contaminating their land. Soon after landing, the Nigerian military shot and killed two of the protesters, Jola Ogungbeje and Aroleka Irowaninu, and wounded 11 others. Chevron spokesperson Sola Omole acknowledged that the company transported the troops, and that use of troops was at the request of Chevron's management. The documentary, Drilling and Killing: Chevron and Nigeria's Oil Dictatorship, won the George Polk Award in 1998.
Michael Delli Carpini, dean of the Annenberg School for Communication, said, "She's not an editorialist. She sticks to the facts.=162,243(3x3x3x3x3),225/15 sq.rt .. She provides points of view that make you think, and she comes at it by saying: 'Who are we not hearing from in the traditional media?'"[17] Amy Goodman=162

Goodman credits the program's success to the mainstream media organizations who leave "a huge niche" for Democracy Now![18]

Maynard=113 Greengrass=113   heartbeat=80  breaking his hip=80
Daughter-in-law Jacqueline Reddin said he died in hospital in Leicestershire, shortly after breaking his hip in a fall from a mobility scooter.
"He was larger than life and he just loved showbiz," she said. "He was so proud of the fact that he had been working for 81 years."
He was perhaps best known as Claude Jeremiah Greengrass in Heartbeat.
Maynard - whose real name was Walter Williams - starred as the scruffy, eccentric poacher in the police drama for eight years, from 1992 to 2000, and was in its spin-off The Royal until 2003.
Other roles included Oh No, It's Selwyn Froggitt!, The Gaffer and In Sickness and In Health. He also made appearances in Carry On films Carry On At Your Convenience, Carry On Matron and Carry On Dick, and was Sergeant Beetroot in TV series Worzel Gummidge in 1980.
Maynard's most recent role was a brief appearance in 2017 drama The Moorside, about the disappearance of Shannon Matthews.
Posted by The Lion's Den at 6:37 AM No comments:

Russia will expel 60 US diplomats 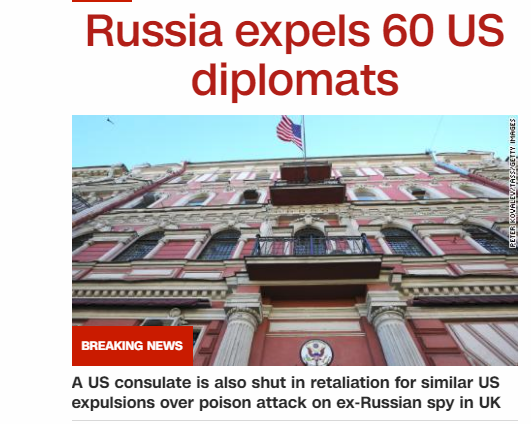 (CNN)Russia will expel 60 US diplomats and close the US Consulate in St. Petersburg, Foreign Minister Sergey Lavrov said Thursday, in retaliation for a similar move by Washington.
The 60 diplomats -- 58 from the US mission in Moscow and two from Yekaterinburg -- were declared "persona non grata" for activities "incompatible with diplomatic status," the ministry said, ordering them to leave the country by April 5. In 7 days..sq.rt.49
US Ambassador Jon Huntsman had been summoned to the Foreign Ministry to be told of the decision, Lavrov said.
Posted by The Lion's Den at 1:18 PM No comments:

3/27/2018=30,48,68,23... 86th day 279 left
14 and 2..142
forty two=142 Louisiana=142,47 Crashing=47, 137/33rd prime
Robert Stafford=211/47th prime ,68 on a day with 68 numerology..he was 42
What a name?!!!? -Dusty Duet=104/14 boy is 14 motorcycle=48
GONZALES=45 like Dusty's age , La. –  A 14-year-old driving a car down a highway in the middle of the night is under arrest after police said he collided with a motorcycle, killing both of its riders.
WBRZ-TV cites a Louisiana State Police news release that says 42-year-old Robert Stafford and 45-year-old Dusty Duet were pronounced dead at the scene shortly before 2 a.m. on Monday. It says the 14-year-old crossed into oncoming traffic on Louisiana Highway 74 and crashed head-on into their motorcycle. The teen eventually hit a utility pole and was hospitalized with moderate injuries. Police don't suspect he was impaired.
The boy's charges include unauthorized use of a motor vehicle and two counts of negligent homicide.
___
Posted by The Lion's Den at 9:27 AM No comments: